HomeNewsMillennials ‘not confident’ when it comes to housework

Millennials ‘not confident’ when it comes to housework 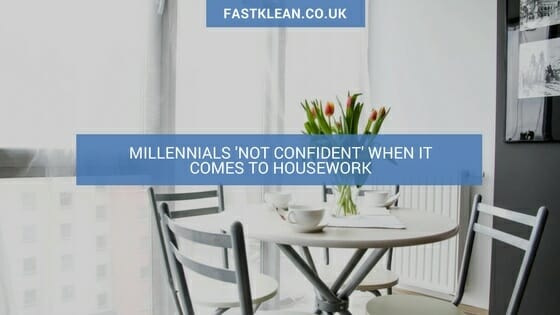 If you’ve moved out of your parents’ house for the first time and aren’t quite sure why you are now always surrounded by a pile of dirty plates, unironed laundry and are terrified of a light bulb going because you don’t know how to change one, don’t worry, you’re not alone.

Home interior company Hillarys has carried out a survey of 2,749 18 to 24-year-olds to discover how clued up they are around the house, finding that many are daunted by the prospect of standing on their own two feet and could do with an extra pair of hands around the house, Horncastle News reports.

Where millennials lack confidence around the house

Hillarys found that only 17 per cent of 18 to 24-year-olds feel totally confident in carrying out household chores for themselves, with 27 per cent believing that they are generally not very competent at domestic chores and ten per cent admitting that they don’t have a clue where to even start.

Replacing a fuse was the task that stumped the most millennials, with more than three-quarters (76 per cent) not knowing how to approach this, closely followed by setting the timer on the boiler, which 72 per cent admitted to not having a clue about.

Ironing was another chore that left people clueless, with 66 per cent unsure of how to press a shirt. Other tasks that left 18 to 24-year-olds stumped included defrosting the freezer (59 per cent), changing light bulbs (51 per cent) and making a bed (49 per cent).

The latter is often the first task that children are given to do for themselves around the house, but it appears half of millennials have not had this experience and are left with messy bedrooms after leaving home.

What’s more, 44 per cent of respondents said they wouldn’t know how to approach putting up a shelf for themselves and 37 per cent didn’t know how to remove lint from a tumble dryer, despite this being a potential fire risk if it is left for too long.

One-third (33 per cent) of those questioned admitted to not having a clue how to clean an oven properly and 19 per cent said they didn’t know how to use a washing machine.

Hillarys spokesperson Tanya Irons commented: “Moving out of the family home and into your own place can be very daunting as it is, let alone if you don’t know how to manage simple tasks like boiling an egg or making your bed in the morning.

“A lot of these jobs are seen as common sense, but clearly for some, it isn’t the case and they need a little extra help establishing the basics.”

Hiring the services of a professional cleaning company for the first few months while you get up to speed with living by yourself, cooking your own meals and paying your own bills can be a big help, allowing you to ease yourself into your new life of independence.

Ms Irons added: “Learning to look after yourself is part of growing up and if you’re struggling there are lots of YouTube tutorials that can help you master it!”