HomeNewsAre you breaking the law when you vacuum?

Are you breaking the law when you vacuum? 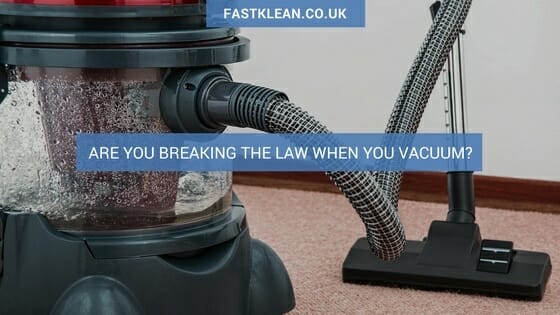 Did you know that you could be breaking the law if you vacuum at certain times of the day?

It’s likely that you will have heard of several of Britain’s strange laws before, such as the fact that it is illegal to be drunk and in charge of cattle in England and Wales, while MPs are not allowed to wear armour in parliament by law.

But are you aware that it’s also technically illegal to sing ‘Happy Birthday’ in a restaurant? If you didn’t, you’re not alone, as almost half (48 per cent) of Brits admitted to breaking this law in a new survey carried out by BT TV to coincide with the UK network premiere of Better Call Saul, which has law-breaking at its heart.

Singing ‘Happy Birthday’ in a restaurant was found to be the most common law broken by Brits, but this was closely followed by vacuuming at banned times.

In total, more than one-third (36 per cent) of survey respondents admitted to vacuuming their home between 6pm and 8am on weekdays, or between the hours of 1pm and 8am at the weekend.

These rules are in place to make sure that vacuuming does not result in excess noise to neighbours outside of the hours deemed to be respectable, but with weekday evenings or Sunday afternoons often the only time that busy householders have free to tackle their domestic chores, this law may appear a little outdated to many.

Indeed, 67 per cent of those questioned by BT TV said they felt many of Britain’s more unusual laws are completely unnecessary, with 84 per cent confused about whether they might have unwittingly performed illegal activities in the past.

Overall, 98 per cent of respondents said they considered themselves to be law-abiding citizens, but many admitted to breaking laws that are actually a little more serious than singing in a restaurant. Some 47 per cent reported drinking while underage, 39 per cent confessed to eating or drinking while driving and 32 per cent admitted to speeding.

In character as his Better Call Saul alias Jimmy McGill, actor Bob Odenkirk said: “Only within England and Wales can someone get into legal trouble for having one too many drinks, vacuuming in the evening, dressing up as a sailor and even flying a kite in a park.”

If you want to make sure you’re remaining on the right side of the law at all times, try to keep your vacuuming to the hours between 8am and 6pm on weekdays, and between 8am and 1pm on Saturdays and Sundays.

However, if this is the only time that you have free in the week, but you want to make sure you don’t get in any trouble with your neighbours, you might want to consider hiring a professional cleaning service to take care of the job for you. They’ll be able to come round to do your cleaning at a more sociable time than you’re able to do the job yourself, vacuuming within the legal hours.