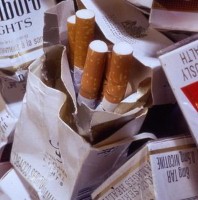 Cigarette packets are the scourge of cleaning agencies

A study conducted by Keep Britain Tidy has suggested that more than half of the waste found on the capital's pavements was cigarette cartons.

This marked a huge rise from 2010, when these items were only accountable for 14 per cent of rubbish strewn across public walkways.

Now, the statistic stands at 62 per cent, but this problem appears to be restricted to London.

Elsewhere, the main source of litter which blights those providing cleaning services is fast food wrappers.

More than half of the towns and cities surveyed were discovered to face most problems from people dropping cardboard boxes from renowned eating outlets.

The issue costs up to £858 million to sort out every year and Keep Britain Tidy is keen for this figure to be reduced.

"We need to make a change so that this country is no longer a place where it is, seemingly, acceptable for some to throw litter," commented chief executive Phil Barton.