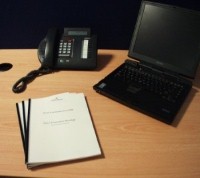 Firms across the UK could be looking to recruit office cleaning specialists, after a study suggested many commercial spaces are riddled with germs.

Research conducted by Viking has found that many office workers could face time off this winter, as the likelihood of them coming into contact with harmful bacteria is high due to the lack of cleanliness throughout British workplaces.

Lawyers, accountants and computer workers were deemed to be the most unhygienic, with many leaving scraps of food lying around on their desks.

Just over half of the respondents said they did not realise they could catch viruses from their keyboards or phones, while two-thirds admitted to eating their lunch at their workstation without making an effort to get rid of crumbs.

"Keeping equipment such as keyboards, phones and desks as germ-free as possible is even more important during the cold and flu season," she remarked.

One firm that may need a cleaning company to keep its office space free from germs is Google, which recently signed a ten-year lease to take on a seven-storey block in the East End of London.