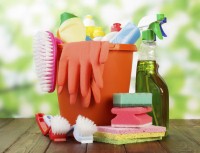 Brits 'spending less time cleaning than ever before'

UK residents are now spending less time than ever before cleaning their own homes, with many taking advantage of professional cleaning services instead.

This is according to research carried out by Mintel, which led to the discovery that Brits are now spending over half an hour (32 minutes) less cleaning their properties than they were in 2014, which equates to 28 hours per year fewer in total.

Richard Hopping, brand and household analyst at Mintel, explained: "Factors including a reduction in the size of the average household, the increasing prevalence of easy-to-use multipurpose products and ever-more time-pressed consumers are likely to be impacting the amount of time people spend cleaning."

With people leading increasingly busy lives, many are spending less time cleaning their homes due to other responsibilities, preferring to leave their domestic cleaning duties in the hands of reliable experts instead.

The research also found that households in the north-west typically spend more time cleaning each week, putting in five hours and ten minutes to make their homes sparkle on average. In contrast, homeowners in Yorkshire and Humberside, along with those in the south-west, tended to spend just three hours and 19 minutes cleaning their properties per week.

What's more, Mintel found that it is women who are often still doing most of the housework in UK homes, spending roughly 90 minutes longer than men cleaning each week.

The survey also showed that cleaning the oven is the household chore that Brits hate the most, with over two-thirds (67 per cent) of respondents citing it as their least favourite task. Cleaning the toilet is the second most-despised chore, as 47 per cent of UK residents expressed hatred for it, while cleaning windows completed the top three most-hated household tasks, cited by 41 per cent.

Although 93 per cent of respondents said cleaning kitchen worktops is an enjoyable household task, to cut down even further on the time spent on housework, why not take advantage of a professional domestic cleaning service?