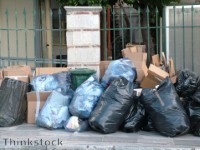 We all have our gripes - especially when it comes to cleaning. We like things done a certain way, or to a certain standard, and often other people just don't get that.

Some people are more particular than others, so we've put together a list of some of the biggest pet peeves people have when it comes to keeping the house clean.

This is probably something that almost everyone can relate to. There really is nothing worse than having smelly, overflowing bins in the home. Not only is it unhygienic, but it's just extremely unpleasant - not to mention slightly embarrassing if you have unexpected guests.

Try not to let the rubbish build up. By recycling as much as you can, you'll reduce the amount of rubbish that's going in your main bin. You can even buy some pretty handy recycling bins for your kitchen to make it easier to separate everything.

It's annoying enough when nobody else helps around the house, but potentially worse when they've done half a job. There's no point cleaning but not tidying as you go, as you're just cleaning around everything. Or when someone removes the bin bag from the bin and just leaves it in the hallway to take itself outside (we've checked - they can't do that).

Try and finish every job that you start, else you'll likely leave the place looking just as bad, or even worse, than it was before.

It's a moment of dread for everyone when you step in something and look down full of disgust to find you've stood in the remains of someone's lunch that they spilled and didn't clean up.

If you make a mess - clean it. This way you don't have to spend as much time cleaning the rest of the time, so it's a win win really.

If you're failing to keep up with these things, then it's probably time to call in the experts.

This way you can be sure that your house is clean and tidy and you can enjoy relaxing in it, rather than worrying about the mess.