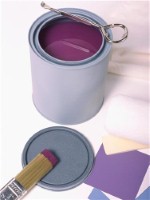 More than one-third of homeowners experience at least one DIY disaster when decorating or renovating their property, according to a new report.

Research carried out by Aviva led to the insurance provider creating a list of the top ten most common DIY disasters experienced by recent home movers, with spilling paint on the carpet coming out on top.

Plaster coming off the walls was the second most prevalent DIY problem, followed by burst pipes in third place and accidentally putting a hole in a wall or ceiling coming in fourth on the list.

In fifth place was people injuring themselves, while the sixth spot went to shoddy jobs that had to be redone, either by the homeowner or a professional.

Despite the prevalence of DIY disasters, nine out of ten new homeowners reported doing at least some decorating or renovating themselves shortly after moving into a new property.

Adam Beckett, propositions director at Aviva, commented: "When it comes to decorating and renovating, most of us have a 'can do' attitude - or we're at least willing to give things a go!

"It's always worth weighing up whether the DIY route is the best way to go, particularly when it comes to plumbing or electrical jobs which could be extremely dangerous if things go wrong."

However, he added that DIY can help new homeowners to stick to their budget, especially in the early days after moving when money is bound to be tight. Figures showed that the average recent home mover spent over £10,000 in the first 12 months after moving on doing up their new property.

With this in mind, it may be a better idea to do it yourself, and then employ the services of a professional cleaning company to help you with any mess that's left behind afterwards.