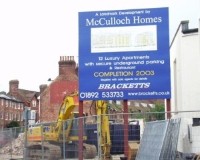 Firms that specialise in after builders cleaning could be seeing increased competition for business, as figures showed the number of new houses being built in Scotland has declined.

New statistics compiled by the government painted a bleak picture of the property market in the country.

This was far less concerning than the figure that suggested only 14,498 new projects were started throughout the year, which was an 11 per cent decline on the previous 12 months.

However, the trend could be worsening, as in the final quarter of the year there was a 29 per cent dip in the number of new property plans being approved.

The housing industry looks to be more promising elsewhere in the UK, as Communities and Local Government statistics showed the number of new-builds being knocked up in the first quarter of 2011 was 26 per cent higher than in the final three months of last year.

This could come as good news for cleaning companies who are targeting their services at residential properties, as the number of homeowners employing professionals to spruce up their abodes may increase.